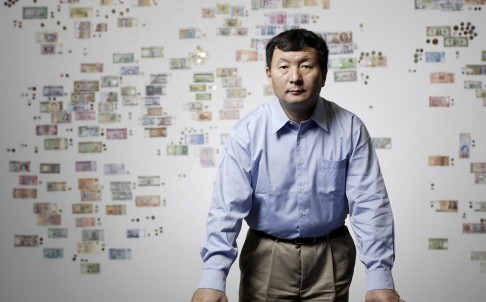 Zane Wang Zhengyu, 58, is the founder and chief executive of China Rapid Finance. He earned a doctorate in statistics at the University of Illinois, and worked for Sears in the United States as a senior analyst and senior manager before returning to the mainland in 2001 to help China create the credit assessment system. He spoke about the company’s peer-to-peer (P2P) lending platform, set up in 2010 and the market prospects of the fast-growing P2P businesses in China.

Could you offer your insights into the P2P model in China?

P2P in China emerged after businesses such as the Lending Club in the US proved successful and the model was introduced to China. More importantly, China’s finance sector was unable to serve a wide range of businesses and individuals. Since mainland banks, without pricing power, were not allowed to set different interest rates for different borrowers to ward off risks, they shunned small businesses and individuals while focusing on extending credit to only state-owned companies. Fortunately, top policymakers noticed the need to reform the finance sector to give cash-hungry businesses and people access to financing. Advances in technology buoyed by the massive inflow of capital and the freedom provided by P2P businesses to offer loans at different rates appeared to be a cure for China’s inadequate financial service sector.

What are the biggest challenges facing China’s P2P businesses?

China’s P2P sector does have a big problem despite the breakneck growth of its business volume. The majority of the P2P businesses have raised huge amounts of funds before lending big sums to corporate borrowers such as property developers. This is not a healthy P2P business model. In short, it’s difficult for the lending platforms to find proper candidates who badly need financing services. The central bank’s credit assessment system has the track records of 800 million people’s borrowing information. But only 300 million of these have had experience of borrowing from the banks. That leaves 500 million people whose credibility can’t be checked but who need to be served. A successful model is supposed to have the four elements: big scale, fast growth, low-cost and high-quality. It must be a big empire that can grow fast by offering loans to needy people at relatively low interest rates. Risks can’t be ignored because a large number of defaults could kill the businesses.

What can China Rapid Finance offer to the local P2P market?

There’s a big debate over the prospects of China’s P2P. Those bullish estimates are based on the vast market because, after all, 500 million untapped consumers is a gargantuan market. This is a no-brainer. Everybody understands it. But if you can’t find a proper business model, the market won’t take off and no sustainable growth can be guaranteed. China Rapid Finance has confidence that we have found the answer to the questions about finding the clients, controlling the risks and lowering the borrowing costs. We have been serving China’s biggest banks for more than a decade and our decision engine has been used by state-owned lenders such as Bank of China and China Construction Bank in issuing more than 100 million credit cards. We have a good command of China’s consumer finance and have the expertise in assessing risks and pricing. What we do now is join hands with the country’s internet giants or the owners of big data. We offer valued-added financing services to their registered users and start by offering them a small loan, say a few hundred yuan.

What’s your core competence in the businesses?

We give a huge number of people access to our pre-approval system for small loans and hope to increase the loan amount gradually. When it amounts to a loan of thousands of yuan, we already have an advantage in risk control and loan assessment. We have a team to help check the borrowers’ capabilities for repayment in 70 cities around the country. The number of cities we cover is expected to rise to 100 soon. This is the job other internet firms can’t do and we are fully prepared for it. Indeed, our core competence lies in the technologies we grasp. Our system is unique and has the ability to make credit decisions. Worldwide, only two companies have the technology. Now we have combined our technology and efforts offline. We are quite confident and want to create a successful and established P2P model in China. I believe other competitors won’t be able to copy our model because they don’t have our expertise in credit decisions.

How is your business doing and how fast did it grow?

Since February this year, we have issued more than 1.5 million loans to consumers. This is a staggering number and a good start. I’d say that P2P businesses can’t survive in China unless you set up an efficient and successful business model. We are well on our way to creating a business that can grow sustainably and healthily.

What differences do you see in the Chinese and US financial sectors?

I learned from the US markets, which are mature and developed. I was lucky to return to China in 2001 and witnessed the growth of the market which had huge potential but a lot of work had to be done before it took off. I think it is time to make changes in the Chinese financial system and make it better .

Who inspired you most in your career development?

British businessman Nigel Morris. He is the only one who embarks on innovations to bring changes to the global finance landscape. He’s the person I most respect. He’s one of the key advisers to China Rapid Finance and his advice has a big impact on our business.

The comments are closed.